Vice-President of the Management Board, Chief Operation Officer, Grupa LOTOS 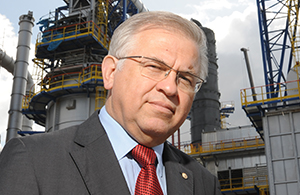 In the refining business, the key challenge in 2013 was to adjust the output mix to market expectations, while keeping operating expenses in check and utilising the production capacities in the optimal way.

In the refining business, the key challenge in 2013 was to adjust the output mix to market expectations, while keeping operating expenses in check and utilising the production capacities in the optimal way.

In the first place, our efforts were designed to:

An important aspect of a refinery’s efficiency lies in the reliability of its units and installations. To ensure problem-free operation of refining units over a longer time, it is necessary to carry out periodic overhauls. In spring 2013, a large-scale overhaul shutdown was undertaken in our refinery in Gdańsk, the first one since the refinery was reconfigured under the 10+ Programme. Even though the scope of the overhaul was significantly more extensive than in the past, the refinery benefited from operating two independent crude distillation lines, the overhaul of which was phased. Thus, the overall downtime in feedstock processing was shorter than during past overhaul shutdowns.

In 2013, projects were continued to increase the use of gas fuel by the refinery, including conversion of the third boiler of the CHP plant into a gas-fired unit. The last boiler will be upgraded in 2014 and from that time on all boilers of our CHP plant will be adapted to run on natural gas. In 2013, we also commenced the construction of a Hydrogen Recovery Unit. Once the project is completed, we will be able to recover hydrogen, LPG and naphtha from low-pressure refinery gases, currently burned in furnaces as a fuel. The recovery of hydrogen and its use in refining processes will reduce the overall cost of hydrogen production and help intensify the oil refining process. The other recovered streams will be marketed as LPG and pyrolysis gasoline. The project is to be implemented in 2013–2016.

To diversify crude oil supply sources and directions, we have launched the Oil Unloading Railway Terminal project, which will enable us to receive and unload oil delivered by rail cars to the refinery in Gdańsk. By developing the necessary infrastructure for unloading oil from rail cars, we will be able to use domestically produced oil in our units.

We are also continuing our plan designed to implement the strategic objective of increasing the conversion ratio and intensifying crude processing by building the coking complex to process the heavy residue from crude oil processing into high-value products. The front-end engineering design stage for the coking complex ended in August 2013. As part of that stage, a coking process licence and technologies for accompanying processes were selected and purchased, and a number of necessary technical analyses were performed. The selection of utility providers and product buyers was commenced. Steps were also taken to ensure adequate financing for the project. The coking unit will be completed in 2017.

In 2012, Grupa Azoty and Grupa LOTOS signed an agreement to jointly carry out a preliminary feasibility study into the construction of a petrochemical production complex. Based on the study results, construction of a steam cracker unit was proposed as a recommended course of action. In December 2013, the Boards of both companies entered into an agreement in which they defined the terms of cooperation and financing of further work. A full feasibility study will mark the next stage in our joint petrochemical project, to determine whether the investment is viable and identify its potential economic benefits.

In 2013, our refinery was once again included in the refining industry comparative performance analysis prepared by Solomon Associates. 2011-2012 were the compared years. For the purposes on the benchmarking study, the refinery is virtually divided into the fuels segment (fuels refinery) and the lubricant segment (lube refinery). The fuels refinery is subject to the Europe, Africa & The Middle East Fuels Refinery Performance Analysis, so the peer group is formed by refineries from those geographical regions. In 2013, the group numbered 107 refineries. The lube refinery is subject to the Worldwide Paraffinic Lube Refinery Performance Analysis, which in 2013 covered 42 refineries.

2012 was the first benchmarking year when all the refinery processes configured as part of the 10+ Programme were fully operational. The Grupa LOTOS fuels refinery performed very well against the peer group. The construction of modern facilities markedly enhanced the refinery’s energy efficiency. At present, the Grupa LOTOS refinery is among the most energy efficient refineries in Europe, with only 5% or so of the refineries having scored better in this category. Further improvement was also seen in labour productivity, as the 10+ Programme had markedly enhanced the refinery’s capacity, with only a slight increase in workforce. Since 2006, the labour productivity ratio has improved by approximately 30%.

Return on capital employed, the most synthetic of all ratios, places the Grupa LOTOS refinery among the 25% best refineries in the analysed region.

The LOTOS Group’s operating activity is centred on refining operations and supplying the market with high quality products, while utilising the production capacities in the optimal way and minimising the adverse environmental impact.

The Group’s operating segment comprises the operations of the refinery in Gdańsk - the largest production plant in the LOTOS Group, and those of subsidiaries involved in production or support functions. The subsidiaries include LOTOS Infrastruktura, LOTOS Serwis, LOTOS Lab, LOTOS Straż and LOTOS Ochrona.

The spring 2013 overhaul shutdown was the most important event of the year at the Grupa LOTOS refinery. It was the first major overhaul shutdown since the refinery’s expansion under the 10+ Programme. The purpose of such shutdowns is to ensure safe operation of the refinery equipment by restoring them to full working order. It is only during these stoppages that certain inspections required by the Office of Technical Inspection can be carried out. In addition, they are an opportunity to implement a number of upgrades, which cannot be done while the units are operational. In the Grupa LOTOS refinery, overhaul shutdowns are carried out at four-year intervals.

The work slated for the 2013 overhaul shutdown was carried out in full. The overhaul work schedule was prepared in accordance with relevant benchmarks for the refining industry, with the target overhaul duration across key process units within the European average. Additionally, in the refinery’s current configuration, it was possible to divide the work between two independent oil distillation lines, the overhaul of which was phased. As the total downtime in crude oil processing was reduced, the shutdown’s impact on the market availability of the refinery’s products was less significant than in previous years.

The overhaul shutdown was used as an occasion to carry out a number of efficiency improving projects, designed to optimise the refining processes and replace old units. The most important of these included:

In 2013, the 30-day downtime led to a year-on-year decrease in the volume of crude oil processed. The refinery processed 8.7m tonnes of crude, which means that the average annual utilisation rate of its installed capacities was 82.9%. The refinery’s workload was adjusted to market conditions, which remained challenging throughout the year.

Utilisation of the refinery’s capacities (%)

As in previous years, the main type of crude processed was Russian REBCO, whose share in the total volume was close to 90.4% and remained relatively flat on previous years. Crude oil imported by sea, including approximately 140 thousand tonnes of Rozewie crude supplied by LOTOS Petrobaltic, accounted for the balance of the crude feed. Following LOTOS Petrobaltic’s acquisition of AB Geonafta, the refinery in Gdańsk also began processing crude oil supplied from Lithuania. In 2013, the volume of Lithuanian crude processed by our refinery was close to 48 thousand tonnes. Throughout the year, we recorded no supply disruptions which could affect the volumes of crude processed by the refinery.

In 2013, the margin levels and demand conditions favoured maximised production of middle distillates such as diesel oil, aviation fuel and light fuel oil, with these products accounting for nearly 56% of the refinery’s total output.

The refinery’s utilisation rate fell as a result of the overhaul shutdown. However, the hydrocracking unit’s 2013 workloads were comparable to those recorded in 2012. This was attributable chiefly to a very short downtime of the 390 hydrocracking unit, which was built as part of the 10+ Programme and launched in 2011, and so did not require any substantial repairs.

Throughout 2013, the focus was on maximising the use of natural gas as a fuel and feedstock in hydrogen production. Natural gas consumption rose by 75% year on year, to reach 372 thousand tonnes. As a result, the output of products previously consumed at the refinery instead of natural gas, such as liquefied gas, gasolines and fuel oil, went up.

The focus of our research and development activities was on further optimisation of technologies for the oils unit’s products manufactured at our refinery in Gdańsk. The most important R&D achievement in 2013 was the development of production technology for bright stock oil with an increased viscosity index of 95 or more, followed by successful production launch and marketing of the product. The viscosity index was increased by using paraffin fraction residue.

As regards road bitumen and oil production technologies, in 2013:

Challenges in strategy implementation until 2015

Actions taken in 2013 were consistent with the objectives of the LOTOS Group’s business and CSR strategies until 2015. In the years to come, our efforts to further increase the efficiency of the refinery in Gdańsk will be continued. The key plans for the coming years include:

Development directions until 2020 in the processing business concern mostly projects that have already been commenced and are aimed at improving the economic efficiency of feedstock processing at the refinery in Gdańsk. The most important challenges in this area will be: